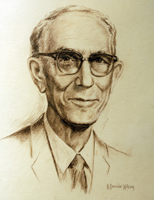 When the class of 1905 graduated from the River Falls Normal School, it was addressed by one of its members, Casper I. Nelson, on the subject of "Making the Most of Experience." This speech was prophetic, for in a career that included teaching, administration, and research, he ably lived up to the high hopes expressed as a senior in 1905. When he retired from the North Dakota College of Agriculture in 1954 and returned to raise flowers and shrubs near River Falls, even his old college class song came true:

And when in after years we roam
Far from these vine-clad halls
We’ll bless the one that tho’t of them
Then let our hearts responsive be,
And ready be our hand
Our watch-cry "For our Normal,
Our God and Native Land."

Following his graduation, Nelson became principal of the grade school at Stratford, where he had four or five different teachers in one year. For the next three years he taught at Viola, and then entered the University of Wisconsin where he earned a bachelor’s degree, was made a member of Phi Beta Kappa and, after graduation, began work for the General Purification Company. In 1914 he joined the North Dakota State College of Agriculture staff where he spent the rest of his career, except for a leave of absence while he pursued his Ph.D. degree at the University of Chicago. While serving as chair of the Department of Bacteriology, he worked with the experiment station developing plants for the dry area of the Great Plains. He also helped establish a University Health Center which later was named in his honor. His university also conferred upon him an honorary doctorate in 1967. Nelson was a teacher and researcher even after retirement when he established the Kinnickinnic Gardens near the scenes of his early days. There he developed a new lilac, "Diana," that was named No. 1 by the National Lilac Association. He was the author of Intimate Bacteriology, a college text and laboratory manual, and numerous bulletins issued by the experiment station and articles in scholarly journals. His greatest satisfaction in life, he said, had come from "having trained a number of students who now head departments of bacteriology in many parts of the nation."