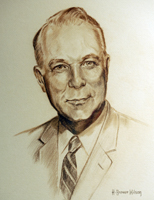 "If a vote were taken to determine who is the best all around man on the campus, ‘Bong’ Luberg would, without doubt, stand very near the top. There seems to be nothing he cannot do, and do well. He came to us from the River Falls High School and from the very first he has been a worthy addition to the school. He was elected president of the freshman class. He sang in the men’s glee club and in the male quartet. He played noteworthy football . . . made the debate squad . . . belonged to the YMCA and participated in dramatics . . . on the campus, he wins the admiration and acclaim of all his fellow students."

Thus did the Student Voice hail LeRoy Luberg when he graduated from the three-year course in 1927. Upon his graduation he became principal of West Junior High School in Madison but returned to River Falls in 1930 to complete his bachelor’s degree. His master’s and Ph.D. degrees were granted by the University of Wisconsin-Madison. During World War II he entered the army as a private and became a major with the OSS in the Burma theater. In 1946 he joined the UW-Madison staff as assistant vice president for Academic Affairs and later became assistant to the president and dean of students.

The advisor to the class of 1927 had predicted that its members would "go down in history in athletics, forensics, dramatics, publications, and scholarship." When Luberg was selected for the Distinguished Alumnus Award in 1967 and to address the 525 graduated at Commencement, 40 years after his first graduation, much of that prediction had come true. He died in August 1982.