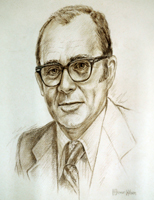 The Meletean editor wrote in 1959 that he hated "to leave now. I've just begun." He must have been speaking for James H. Laue, for reading his undergraduate record is like calling the roll of student organizations. He was president of Kappa Delta Pi, on the Student Voice, in the orchestra and Glee Club, member of the French Club, and was elected to Who’s Who in American Colleges and Universities.

Upon graduation he received a Harvard fellowship and a Danforth Foundation grant (one of 87 in the nation) and continued his studies in sociology. But as the editor said, his activities had "just begun." After receiving a Ph.D. from Harvard, he served the U.S. Department of Justice, Community Service, taught classes at Harvard, Hollins College, Emory University, and at three major universities in St. Louis. Active in the human relations field, he served with the late Martin Luther King, Jr. and wrote Third Men in New Arenas of Conflict (1970) and First National Workshop in Community Crisis Intervention (1971). He was founder and director of the Community Conflict Resolution Program.

Laue was director of the Center for Metropolitan Studies at the University of Missouri in St. Louis and worked as co-chairperson (with Bryant Wedge and Ambassador Andrew J. Young) for the establishment of a National Peace Academy to serve the nation in resolving social and other types of conflict. "An understanding of conflict and systematic ways of resolving it are central to an understanding of what urban areas are all about," said Laue in a magazine article. Dr. Laue passed away on Sept. 25, 1993 at the age of 56.