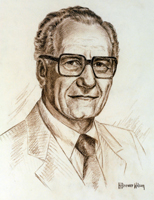 Fred Lanners, a resident of St. Paul, Minn., was attracted to the River Falls campus long before the reciprocity agreement between Minnesota and Wisconsin was made. After three years at River Falls taking the basic sciences, he transferred to the University of Minnesota where he received a chemical engineering degree. When he was appointed senior chemist at Economics Laboratory, a cleaning and sanitation firm that has more than 7,000 employees and a world-wide market for its products, he began a career that took him only upward on the corporate ladder.

Lanners’s next step with Economics Laboratory came in 1955 when he was named assistant to the president; four years later he became director of industrial sales and in 1960 he became administrative vice president with responsibilities for research and development, the dairy division, and international operations. Two years after being elected to the board of directors, Lanners became president of the company, and in 1978 was named chief executive officer and chairperson of the board.

This busy executive has always found time to be involved in community organizations. He has served as president of the St. Paul Chamber of Commerce, director of the National Organization of Manufacturers, director of the First Bank of St. Paul, of American Hoist and Derrick, and other corporations, and as a member of the Board of Regents of St. John’s University in Collegeville, Minn. The influence of Fred Lanners can be seen in corporate America and the civic organizations that make up the fabric of our society.