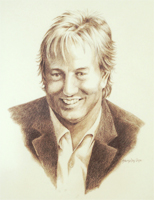 Mark Lacek believes in the power of a dream. And the 1979 University of Wisconsin-River Falls graduate continues to dream big and deliver.

In recognition of his extraordinary creative vision, his entrepreneurial acumen, and his generosity, Mark Lacek was named the 2009 University of Wisconsin-River Falls Distinguished Alumnus.

Already an entrepreneurial thinker, the Mercer, Wis., native’s ideas started taking shape when he arrived on the UW-River Falls campus in 1975. While working toward his bachelor’s degree in economics, Lacek started a pizza delivery business on campus and even thought about starting a restaurant with his roommate Ron, to be called McRonald’s (to compete with McDonald’s).

After graduating in 1979 with a degree in economics, Lacek  landed a job in strategic planning at Republic Airlines, which later merged with Northwest Airlines. Lacek’s career took off after he was named marketing director and was the major creative force behind the WorldPerks frequent flyer program.

As the first of many honors to follow, Advertising Age magazine hailed Lacek as “one of America’s best and brightest in advertising and marketing.”

In 1993, Lacek co-founded Lacek Group Worldwide. Under his leadership, the company re-launched the Delta Sky Miles program and established loyalty programs for a host of global brands, including National Car Rental, Starwood Hotels and Singapore Airlines. In 1998, Lacek was named Ernst and Young’s “Entrepreneur of the Year-Midwest Region.” Lacek’s experience with a wide array of companies is impressive and diverse. He has served as CEO and president of Milepoint, an Internet loyalty application and technology company. He co-founded BidPal Technologies, which specializes in wireless devices for charitable and silent auctions, and Bonfire Partners, a full service loyalty and brand-marketing agency. Lacek is currently managing partner of Denali Marketing and is set to launch his next enterprise.

In addition to his many successes, big game hunts, world travels, and meetings with the rich and famous (he once shook hands with President Bill Clinton), nothing compares to the joy his family members, wife Susan and daughters Emmy and Ally, bring him, or is as rewarding as the nonprofit organization that he and Susan founded as a tribute to their late daughter to help grieving parents and families.

Named for their first child, Faith, who died at birth, Faith’s Lodge was born in response to the anguish the couple endured. They raised $3 million and donated 80 acres of Wisconsin land to establish the lodge as a retreat for parents who have suffered the loss of a child or for those who have chronically ill children. Faith’s Lodge has been featured in local and national newspapers and on TV shows including NBC’s “Today” show.