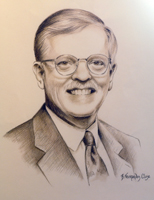 In his civic activities, Knutson has served as the commissioner of the California Commission on Peace Officer Standards and Training and he also served on the California State Board of Behavioral Science Examiners.

His numerous academic honors include twice being selected for a prestigious Fulbright Scholarship, to Korea in 1992 and to Russia in 1996. He also has served as president of Phi Beta Delta, the honor society for international scholars. He is listed in "Who's Who in the World, 2001" and holds the title of Fellow of the International Association for Intercultural Research.

Knutson is widely published. He has presented papers and speeches at scores of conferences and in scholarly publications. His research has ranged from such diverse topics as a comparison of Taiwan and U.S. rhetorical sensitivity and conflict style, to Russian democratization and cultural values, to communications training for retail sales people, to communication styles for pharmacists.