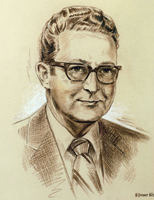 Reminiscing during UW-River Falls’ Centennial, Robert P. Knowles recalled that he had been closely associated with the University for fifty years. He was born in River Falls, attended the Campus School, and graduated from the State Teachers College in 1938 with a degree in history. Of the "firsts" that he recalled, he noted the time when he climbed through a basement window of North Hall and swam in the new pool for the first time. His interest in politics was first kindled by the experience of assisting a faculty member in a City Council race. "This whetted my appetite for politics," he recalled, "and I ran for and was elected to the first Student Senate on the campus .  .  ." The big issue before the Student Senate was whether the administration would allow them to have a smoking room in the South Hall basement.

Upon graduation, Knowles established an insurance and real estate office in New Richmond and, in 1955, was elected to the Wisconsin Senate, an office he held until 1976. During that long political career he served as president of the Legislative Council, Majority Leader, president pro tempore of the Senate, and chairman of the Joint Committee of Legislative Organization. He also served as assistant director of Housing for the 1960 Republican Convention, and in 1964 and 1968 also looked after the physical facilities for the National Republican Conventions. In 1965 he was elected president of the National Conference of State Legislative Leaders and was a member of the Advisory Committee of the Eagleton Institute of Politics at Rutgers University for many years, conducting seminars for promising young legislative leaders of the nation. When the issue of merging the State University System and the University of Wisconsin System arose, Sen. Knowles opposed it, saying that he feared "that for those of us whose eyes get misty on hearing the pledge song, some of the special and unique flavor of the school that we knew might be lost in the vastness of the University of Wisconsin .  .  ."  As a state senator, Knowles often assisted his alma mater in the vortex of the Wisconsin political system. He served on the UW System Board of Regents from 1981 until his death in 1985.