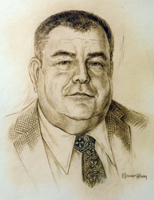 This son of a Polish emigrant family came down to start his college career at River Falls to blaze a new trail in his family’s history. Working for board and room while pursuing a bachelor’s degree in science and mathematics was no problem since the work ethic had long been a part of his family life.

After serving in World War II, he pursued his D.D.S. degree at Marquette University and, upon graduation, practiced dentistry in Eau Claire, Ashland, and Hayward. He returned to his home community in 1974 to give dental service and leadership in civic affairs until his death in 1981.

Kliszcz built the first dental clinic in northern Wisconsin and also the Medical Center in Hayward. Though his professional life centered on dentistry in a region where medical and dental services were thinly spread, he found time to serve in various community organizations and to work with the youth of the region. For many years he hosted annual Halloween pumpkin parties for children and sponsored a ski-dental seminar at Telemark.

In 1977 he realized a lifetime dream by establishing a restaurant, Kliszcz Karozma, where authentic Polish food was served. Based on recipes from his own home and from the Polish tradition, the restaurant attracted many patrons who enjoyed ethnic foods, especially the sauerkraut which Kliszcz made himself.

Kliszcz’s career well illustrates the role played by UW-River Falls in offering opportunities for young people to reach levels of competence and service that has enriched many people. Kliszcz’s life as a dentist and civic leader enriched the Cable and larger community and left behind a name worthy of the award of distinguished alumnus of this university.