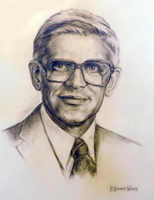 Polk County is noted for its dairy farms, good schools, and scholars such as Neal Jorgensen.  Having grown up on a dairy farm and having graduated from the River Falls program in agriculture, Jorgensen earned his M.S. and Ph.D. at UW-Madison, majoring in dairy science and biochemistry.  With the exception of the two years spent at South Dakota State University-Brookings, he has spent his career on the UW-Madison campus as a professor of dairy science.

Twenty-three years after receiving his degree from UWRF, Jorgensen became chairperson-elect of the UW-Madison Department of Dairy Science and soon thereafter became associate dean of the College of Agriculture and associate director of the Wisconsin Agriculture Experiment Station.

Honors have been many in Jorgensen’s career, starting with the Gold R and membership in Pi Kappa Delta and continuing with the "Babson’s Dairy Chair" at the Phoenix, Ariz. Stockman’s School in 1970, as well as many other awards.  His research has resulted in more than 80 scientific publications and he is recognized as making major contributions to his roots-the dairy farms of Wisconsin.

Upon receiving the distinguished alumnus honor, Jorgensen, who has received many rewards for his teaching and research and is in Who’s Who in America and the World, said, "I believe I am going to enjoy this.  I love agriculture and I appreciate the state of Wisconsin’s efforts to support higher education."