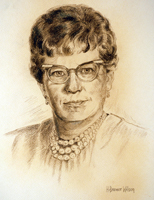 Back in the mid-1930s, faculty and fellow students of LaVernia Jorgenson might have predicted that she would carve out a distinguished career in physical education and athletics. As a student she was a leader in women’s athletics, played badminton, basketball, baseball, and tennis, and was president of the Women’s Athletic Association. Beyond these activities, she was also on the Meletean staff, was a member of the YWCA, and had a good academic record.

Since graduating in 1939, Jorgensen has taught in several high schools, earned a Ph.D. at Indiana University, and has been a member of the Physical Education and Recreation staff at the University of North Dakota where she retired as chairperson of the department. In the world beyond the classroom she has held numerous positions of honor and trust, including the presidency of three professional organizations, chairperson of various state and national associations, and editor of Delta Psi Kappa magazine. She is listed in 10 registers of notable women and is a frequent contributor to journals in the physical education field.

Jorgensen has been named "Woman of the Year" by the North Dakota chapter of Phi Sigma Alpha and has been recognized by several women’s organizations as the "Outstanding Woman in North Dakota Athletics."