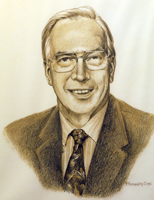 Through a research career that began with the USDA in 1964, Johnson is credited with several scientific breakthroughs that significantly affected lifestock reproduction throughout the world. He is recognized as an international authority on the application of sexing technology in all mammals.

In 1971 he collaborated with a colleague to devise a method of preserving swine sperm that is now internationally recognized as the Beltsville Freezing and Thawing Method. The research centered on basic cellular structure that led to the ability to successfully cryopreserve swine sperm. The freezing technique has been exported to more than 40 nations and is responsible for upgrading swine production in both developed and developing nations. In 1977 Lawrence was recognized for his achievement with the USDA's Superior Service Award.

In 1989 he published the results of the first and only successful and reliable method for preselecting the sex of mammalian offspring, a major advance in reproductive biology. Johnson's research consisted of devising a technology to separate live sperm into chromosome-bearing populations and then confirming a shift in sex ratio of offspring. The technology has been applied successfully to swine, rabbits, cattle, sheep and chinchilla, with the populations routinely more than 90 percent pure. Johnson's fellow researchers recognized the breakthrough as an outstanding scientific achievement that had a significant impact on science, the efficiency of animal production, and on human welfare. His research was recognized by the American Society of Animal Science with its Physiology and Endocrinology Award in 1991, and in 1994 by the Alexander von Humboldt Foundation Award the Agriculture Research Service Distinguished Scientist of the Year Award.