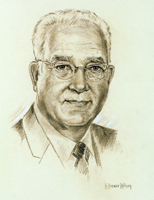 This distinguished alumnus from Elk Mound attended River Falls at the time it was in transition from a Normal School to a Teachers College and graduated the year before it granted its first bachelor’s degree. His major was the three-year course in science and mathematics. The Student Voice spoke of him as "a good student" and prominent in campus affairs. He was obviously a campus leader for he was president of the YMCA, president of the State Student Council, a member of the Lincolnian debating society, a bass in the Glee Club, and a letterman in football in his third year. After leaving River Falls, he was granted a bachelor’s degree by the University of Chicago, and master’s and Ph.D. degrees by the University of Wisconsin-Madison.

Jenson spent the first 20 years of his educational career as a superintendent of schools in Wisconsin, including Delavan, Fond du Lac, and Shorewood, and served as president of the Wisconsin Association of School Administrators. In 1957 he became professor of education at the Ohio State University and in 1962 became department chairperson. Three years later he was appointed dean of the College of Education at Bowling Green State University, a position he held until his retirement.