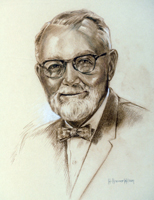 It was the "accident" of having a teacher from River Falls that caused a Sleepy Eye, Minn., student named Reynold A. Jensen to enter the Normal School in 1922. Having completed the high school teacher training course and having taught rural school for two years, he was advised to go to River Falls for further teacher training by Virginia Wales, a former teacher who attended River Falls. While in college he was active in the YMCA and after graduation served as secretary of the Milwaukee YMCA while attending the Normal School there. He then studied at Columbia University, but returned to the University of Minnesota where he was granted the M.D. degree in 1938. In his career he had been a teacher and physician in New York, Pennsylvania, Massachusetts, Utah, Louisiana, California, and Wisconsin and lectured nationally to medical and educational groups. Following his series of lectures at the Third Pediatric Conference in Guatemala in 1955, he was made an honorary member of the University of San Carlos. Most of his career, however, was spent as professor of Psychiatry and Pediatrics, and from 1942 until his retirement, he was director of the Division of Child Psychiatry at the University of Minnesota Medical School. In 1959 he spent his sabbatical year in Europe, including time at the World Health Organization in Geneva, Switzerland.

Jensen gave credit to River Falls professors for his career, and said that these "stalwarts lived what they taught and vice versa." In his yearbook one of them had written: "Nuggets of character are greater than nuggets of gold, for they may be shared with all humanity and not degrade a soul." Perhaps it was this feeling of debt that caused him to establish the student loan fund in memory of Mrs. Charles W. Norris, to give to his alma mater a watercolor portrait of his favorite professor, the late YMCA advisor James P. Jacobson and to make other gifts to the Foundation. He was a member of the Foundation Board for many years. After his retirement from the University of Minnesota, he was affiliated with a hospital in St. Cloud, Minn. He died in 1982.