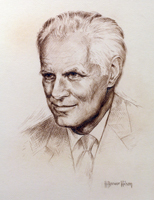 The class of 1946 included the young men whose college careers were interrupted by service in World War II. Willard J. Jacobson of Hixton was one of these young men who left the halls of ivy for the Air Force and served in the European theater with a unit that won recognition in Belgium. As a student he was a member of the Honor Society, Mathematics Club, Science Club, YMCA, and played on the varsity baseball team. Following his graduation, he first taught science and mathematics at Palmyra, then moved to Lincoln, N.Y.  His master’s and doctoral degrees were taken at Columbia University.

Jacobson has been on the Columbia University faculty since 1950, serving in the Department of Science Education as professor and chairperson of the department. He also has been a Fulbright lecturer at the University of Hawaii.

This distinguished alumnus is co-author of "Modern Elementary School Science" (1961) and is the author of "The New Elementary School Science" (1970). He is also the author of several multi-volume science textbooks in the elementary field and is editor of science research publications. Jacobson has been a consultant to UNESCO, the Royal Afghan Ministry of Education, and the All-India Science Methods Institute. He has often been sought by other educational organizations, and over the years has been on the New York Examiner Advisor Committee and director of the Science Manpower Project, the Nutrition Education Research Project, the Citizens and Science Research Project, and co-director of the Population Education Project. He is listed in American Men of Science and Leaders in Education. The career of this young man from the small farm at Hixton has deeply affected the direction that science teaching in the elementary school has taken in recent decades.