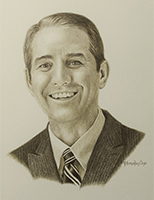 Boyd Huppert, a 1984 graduate of UW-River Falls and Emmy award-winning journalist for KARE 11, has been named the 2013 Distinguished Alumnus.

Huppert has been a reporter at KARE 11 in the Twin Cities for 17 years and his work has appeared on both CNN and NBC. He has won numerous awards including a national Emmy for feature reporting, more than 60 regional Emmys, eight national Edward R. Murrow Awards, three national Sigma Delta Chi Awards, three Gabriel Awards, six National Press Photographers Association awards, and a National Headliner Grand Award.

Although he is one of the most recognized reporters in the Twin Cities media market, anyone who has ever seen one of Huppert's stories would likely be more inclined to describe him as a "master storyteller" as his love for the storytelling aspect of his job and the people who bring his stories to life is apparent in every piece he creates.

Huppert has also become widely known for his work as an instructor. He has presented more than 100 video storytelling sessions at venues including the National Writers Workshop, Danish Broadcasting in Copenhagen, NRK in Oslo, and TV New Zealand in Auckland. He is also a longtime faculty member at the NPPA's Advanced Storytelling Workshop, held each spring at Texas State University-San Marcos.

Huppert began his post-graduation career in 1984 with a position at WSAW-TV in Wausau, and worked at two more TV stations, KETV in Omaha, Neb., and WITI in Milwaukee, before joining KARE 11 in 1996 as a general assignment reporter.

One of Huppert's regional Emmys, presented by the Upper Midwest Chapter of the National Television Academy in 2006, is on display in the UWRF Journalism Department. This is not unusual, however, as Huppert is known for giving away his Emmys, often to the subjects of his stories. A similar Emmy of Huppert's is on display in the lobby of the Falls Theater in River Falls in honor of a story he did about former theater owner Stan McCulloch.

Huppert has been back to River Falls numerous times to cover stories and on campus throughout the years as a featured speaker, master of ceremonies, and as a guest lecturer in many journalism classes where he provides career advice for UWRF students and answers students' questions about the joys and challenges of working in television news