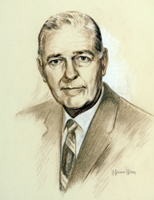 Hunt taught mathematics and coached at Algoma until 1935 when he became a salesman for Algoma Plywood and Veneer Company. When the company merged with U.S. Plywood, Hunt moved to Chicago to manage the Midwest Division which included six branch offices. By the time he was 45 he had become vice president of U.S. Plywood, and in 1957 he joined Georgia-Pacific as vice president. When he was given the Distinguished Alumnus Award in 1969 he was executive vice president and a member of the Executive Committee.

His interests were always broader than his business responsibilities. He served on the executive committee of United Good Neighbors, was a trustee of Oregon State University Foundation, member of the Board of Trustees and Development Committee of St. Vincent Hospital, and the Corporate Committee of Fordham University. Hunt also gave a Challenge Gift for the construction of the Wall Outdoor Amphitheatre and contributed to the Walter H. Hunt Arena named in honor of his father who was a professor at UW-River Falls for many years.