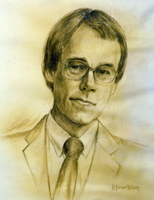 When Wayne Hendrickson arrived on the River Falls campus from Spring Valley in 1959, he lost little time in becoming involved and was on the debate squad during his freshman year. From then on, it was a story of increasing activity. Continuing in debate, he was also president of the sophomore class and served three years on the Student Senate. In his senior year he was a part of the Physics Colloquium that stimulated research on various problems in physics and presented papers for lectures and discussion. But his interests were broad; he was in the Liberal Arts Honors Society and served on the Concerts and Lectures Committee.

After graduating from River Falls with a major in biophysics, he went to John Hopkins University where he got his Ph.D. degree in 1968. He stayed there the following year as a research associate and then joined the Naval Research Laboratory as a post doctoral research associate of the National Research Council. He was then appointed as a research biophysicist and earned the Navy Meritorious Civilian Service Award and the Arthur S. Flemming Award for Outstanding Young Federal Employees.

In 1984 Hendrickson became professor of biophysics at Columbia University College of Physicians and Surgeons. His research into the atomic arrangements in several oxygen-carrying molecules and his development of computational models have been widely acclaimed as having great potential in the medical treatment of severely anemic patients and for use with heart-lung machines during surgery. He is listed in American Men and Women of Science.