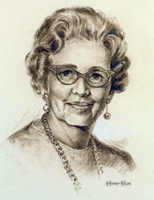 The class of 1938 was an unusual class, for it included four students who were later to be awarded the Distinguished Alumnus Award. One of these students was Marion E. Hawkins, who had the further distinction of being selected for the Distinguished Teacher of the Year Award the same year she received the Distinguished Alumna Award. As a student at UW-River Falls, she was an English and speech major, served on the debating teams, was one of the originators of the Student Senate, was elected to every class office, and held various other leadership positions. Following graduation she taught English and debate at New Richmond, Monroe, and Milwaukee, and in 1946 joined the English department at her alma mater.  She received her master’s and Ph.D. degrees from the University of Wisconsin-Madison, her doctoral thesis being "Oliver Goldsmith as Essayist." At UW-River Falls she coached debating for 10 years, taught classes in literature, poetry, and English for foreign students, was advisor for the international student program, was a charter member of the Foundation, and in 1976 was elected president of the Board. For several years she served as provincial governor of Pi Kappa Delta and was chairperson of activities at the national conventions of Pi Kappa Delta and of the National Council for Teachers of English. Her Distinguished Teacher Award mentioned her dedication, knowledge, and enthusiasm.

At the Homecoming luncheon of Pi Kappa Delta in 1957, when she was retiring from the duties of directing speech activities, a telegram from a former student well expressed the high regard with which she has been held: "Debated against Marion in high school, lost. On same team with her in college, much better arrangement."

Following her retirement in 1981, Dr. Hawkins continued to travel and lecture in many areas. Her contributions to global understanding through education led to her recognition by the Minnesota chapter of the American Association of University Women for her promotion of international relations. Marion Hawkins passed away Aug. 22, 1999.