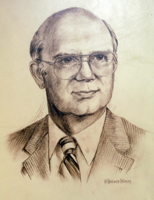 Back in 1954 the freshman class at River Falls elected a vice president from the little town of Pepin. In 1961, the UW-Madison School of Medicine awarded him an M.D. degree. After serving in the U.S. Public Health Service, he specialized in radiology at University of Minnesota-Mayo Foundation Graduate School of Medicine, and in 1970 joined the staff of the Department of Diagnostic Radiology. In those years he won recognition not only at the most distinguished medical institution in America but also in the larger world of medicine.

Hartman served on many departmental and institutional committees and as chairperson of the Department of Diagnostic Radiology, chairperson of Medical Specialties, associate director of the Mayo Foundation Division of Education, and others. He was a member of and an officer in the American College of Radiology, the American Roentgen Ray Society, the Society of Uroradiology, and a founding member of the American Association of Clinical Radiologists. Over the years he served as consultant to many institutions and organizations, reviewed books and articles for the American Journal of Roentgenology, and is listed in Who’s Who in America.

Hartman made contributions beyond his specialized field of medicine. He served as a sponsor of refugees, has been an officer in the United Way of Olmstead County and worked with Ability Building Center of Rochester, and spearheaded a drive to establish a scholarship for a pre-medical student at River Falls named in honor of Professor B.H. Kettlekamp.