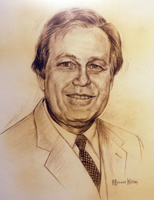 When he was a student at River Falls, H. Gaylon Greenhill got a taste for politics that would prove useful in his later career. A social science major, he served as a Wisconsin congressional intern in his junior year and was a member of the Young Democrats throughout his campus years.

A native of New Auburn, he graduated from what was then Wisconsin State College at River Falls in 1958. He went to the University of Illinois where he had a James Garner Fellowship and got his M.A. degree in 1959. After taking a year out as a Fulbright Scholar at the University of Oslo, he returned to Illinois and received his Ph.D. degree in 1962. An article based on his doctoral dissertation, "The Norwegian Agrarian Party: A Class Party" was published in Social Science, 1965. He is also the author of "Labor Money in Wisconsin Politics," a monograph written after a grant from the Citizens Research Foundation.

Joining the faculty at UW-Whitewater in 1962 as an instructor in political science, he became the department’s first chairperson three years later. He was named dean of the Summer Session and Extension in 1968, acting dean of the College of Letters and Sciences in 1970 and vice president and dean of faculties in 1971. He was appointed chancellor in 1991.

Greenhill’s political interests led him to be active in faculty governance issues and he had a special interest in retirement problems. He served on committees for the Association of Wisconsin Faculties and was appointed to the State Teachers Retirement Board in 1978 and again in 1982. He was also a member of the Employee Trust Fund Board. Greenhill was elected twice to the Whitewater City Council and is a past president of the city’s Police and Fire Commission.