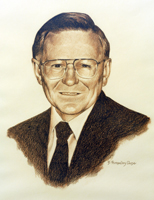 A physicist who has carved out a remarkable career in scientific aerospace research for the national space, defense and intelligence communities, as well as private businesses, has been named the 1997 Distinguished Alumnus at UW-River Falls.

Receiving the award at the university's commencement ceremony on May 18 is Gerald D. Godden, a native of Hudson and 1960 graduate of Roberts High School, and a 1965 mathematics and physics graduate of UWRF.

Godden currently is a scientist and technical consultant for Physics Applications Inc., a self-owned company providing technical and managerial service to the NASA Goddard Space Flight Center, the U.S. Customs Service, the Office of National Drug Control Policy, and the Department of the Army/Research, Development and Acquisition, as well as to commercial enterprises.

His many projects have included serving as a deputy manager to NASA as a key member of it Earth Observation System Moderate Resolution Infrared Spectroradiometer team. For the U.S. Customs Service, he developed a technology survey and technical analysis of trucking and shipping containers that led to more affordable and comprehensive inspection of international cargo for narcotics or other contraband. His commercial projects include advising The Analytic Sciences Corporation for Motorola Iridium commercial satellite communications.

He also has worked as the vice president and chief scientist for the engineering and information technology sector of Science Applications International Corp. of Reston, Va., and as director of corporate advanced programs for The Analytic Science Corp. of Arlington, Va.. He also served as business manager of military and science payloads office for TRW Space and Technology Group of Redondo Beach, Calif., on a wide range of space projects for NASA, the Department of Defense and the Department of Energy. These included NASA's Advanced X-ray Astronomy Facility, the Space Infrared Telescope Facility, as well as such defense projects as the Advanced Defense Space Project, Strategic Surveillance and Tracking Satellite System, and Anti-Submarine Warfare.

As the director for strategic operations at Ball Aerospace in Boulder, Colo., he led program development for the Lincoln Laboratory strategic surveillance Optical Airborne Measurement Program.

Godden earned a doctorate in physics from the University of Colorado where he specialized in high energy physics with a broad mathematics background. At the university, he also worked as a principal investigator for solar physics research with its Laboratory for Atmospheric and Space Physics, and as a researcher in its High Energy Physics Laboratory.

At UWRF, he minored in English in addition to his double major in physics and mathematics. Godden was a member of the Humanities Honor Group, received the Gold R Award for academic excellence, and the Stratton Hall Scholarship for the highest grade point average. He also participated in an internship in Frankfurt, Germany, and studied the French language at the Sorbonne.

"The University of Wisconsin-River Falls provided a solid foundation for my career," said Godden. "It was the inspiration for my technical career, and very importantly provided me a broad background and appreciation for the humanities. My undergraduate background and support group from key members of the faculty presented me several choices for my future."

The assistance of several faculty members, including Vera Moss, Francis Chisholm, Wayne Sukow and Earl Albert encouraged Godden to pursue his graduate studies and were critical in his achieving a National Science Foundation Fellowship at the University of Colorado.

"Through life's subsequent experiences and encounters, I have come to appreciate the outstanding humanities background I received from my undergraduate experience. I owe much to my UWRF background and preparation for life's major choices," Godden noted.