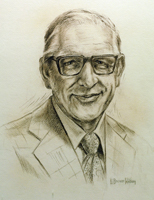 Theodore P. Gleiter, a graduate of Hammond High School, entered River Falls as a sophomore and in the next three years he was active in the chorus, band, orchestra, YMCA, and intramurals, was a member of the Honor Society, and was listed in Who’s Who in American Colleges and Universities. During World War II he served in North Africa and the Caribbean, part of the time being assigned to the Institute of Tropical Meteorology in Puerto Rico. His mathematics and science major along with this assignment affected the direction of his whole career.

After receiving this master’s degree and doing further graduate work at American University in Washington, D.C., he began his work for the U.S. Weather Bureau as a meteorologist. From 1956 to 1963 he was director of the Budget and Management Division of the Weather Bureau and special assistant to the chief from 1963 to 1966. He joined the National Oceanic and Atmosphere Administration as assistant administrator in 1966. In both groups he was active in developing programs that provided opportunities for various minority groups. In recognition of his work he was given Equal Opportunity Awards by the Commerce Department in 1971 and by the Atmospheric Administration in 1974.

His concern for the disadvantaged has extended beyond his professional life. He founded the Annandale, Va., Christian Community for Action which provides food for the needy, operates a day care center, and maintains a storehouse of usable furniture for low income rental units. In Washington, D.C., Gleiter was a founder of Home Buyers, Inc. that supplies down payments on houses for low income families seeking homes.