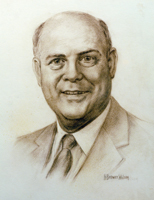 When Roger Gerrits was informed that he had been selected to receive the Distinguished Alumni Award by the UW-River Falls faculty, he said he was honored and flattered to receive this prestigious award.  He remembered his days on campus where his agriculture studies prepared him "for the many situations I have encountered throughout my career."  He added that he "had always been a very proud alumnus and am thankful that I selected River Falls to start my academic roots."

This alumnus from Green Bay had moved on to the University of Minnesota to study animal science physiology where he received his M.S. and Ph.D. degrees.  His first position as a research physiologist, U.S.D.A. Animal Science Division, in Beltsville, Md., led to a continuous career as a research scientist. He is now national program director for Animal Production at the U.S.D.A.

Gerrits is the author of more than 60 research papers, has participated in many international conferences, and has been awarded the "Chevalier du Merite Agricole" by the French government; Distinguished Service Award by the National Pork Producers Council; as well as awards from the National Science Foundation and the U.S.D.A.  Gerrits should not have been surprised when Chancellor Gary Thibodeau said that the "significant contributions you have made in the field of animal science both nationally and internationally were primary factors in your selection."