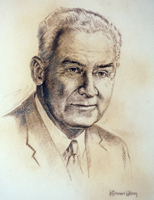 When Orville Fay of New Richmond attended the River Falls Normal to pursue the two-year course in agriculture, the enrollment was 518 and most of the students planned to be elementary teachers. He was a member of the public speaking society, the Lincolnian debating society, the Agrifallians, YMCA, "Meletean," and Camera Club, all of which contributed something to directing his career into plant breeding and the development of new varieties of several flowers. When he graduated, the Meletean had this line beneath his photograph: "I am more sinned against than sinning." This may have suggested a sense of humor along with  his interest in flowers.

After graduation, Fay served in the Navy, traveled extensively, and developed the hobby of wood-carving. From 1934 to 1952 he worked for the Nutrine Candy Company of Chicago. It was plant breeding, however, that earned Fay international fame. He received more than two and a half times as many horticulture awards as any other person in his field of plant breeding and had the distinction of being the only American to have three prestigious Dykes Medals and Stout Medals. In addition he received the Dave Hall Awards, the American Irish Society Medal, the Foster Memorial Award from the British Iris Society, and the Bertrand Farr Medal for his day lily and iris.