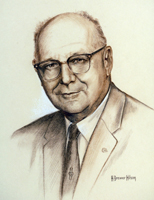 When Ray S. Erlandson came to River Falls in the summer of 1912 to sell aluminum cookware door to door, he made the mistake of selling some to the wife of President James W. Crabtree. The president then convinced him that he should give up his salesman’s job and become a student at the Normal School. Two years later he graduated and became a teacher at Chippewa Falls and River Falls. During World War I he served as a second lieutenant in the Field Artillery. While serving as an instructor in the artillery, he wrote the president to tell him that he had "not received any information from old Normal as to what activity she is in, nor do I know how many of the boys are in the service. I wish you would delegate someone to enlighten me on some of these points as I am as interested in old R.F.N.S. today as at any time before." When peace finally came, he said, "The United States will continue to call for the ablest. River Falls will do her part."

After the war, he became first assistant secretary and business manager of the National Education Association (then headed by former President Crabtree). From 1925 to 1953, he was director of broadcasting for Majestic Radio, manager for automobile sales for Zenith Radio Corporation, vice president of the Wurlitzer Company, and educational director for Grigsby-Grunow Company.

In 1953 he became chair of the Department of Business Administration at Trinity University in San Antonio, Texas, and a year later he took the position of president of the Children’s Fund. In the years when he was involved with radio, he originated the American School of the Air, the first national radio program. His record indicated that the nation had called "for the ablest," and that River Falls had done "her part" in supplying talent, as he had written 41 years before.