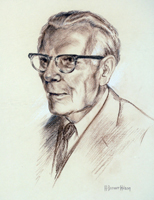 When Raymond P. Ensign returned to the campus in 1961 to receive the third Distinguished Alumnus Award, he rounded out a career as an artist and educator that was marked by many honors in art education. The Eastern Arts Association had presented him its Gold Medal "For long and distinguished service in the field of art education," and he had held some of the most honored positions in art education in America.

Ensign was a second generation graduate of the school, having been preceded by both parents in the early years of the Normal School. He served as principal of the Grand Avenue School in Chippewa Falls in 1902-03 and then went on to New York’s Pratt Institute where he graduated in 1905. For a time he served as a furniture designer for the W. & I. Sloane Co. but later returned to Pratt as an instructor. In 1919 he became head of the design department at the Cleveland School of Art and dean of the famed Chicago Art Institute in 1922. He ended his career as an art educator at the School of Fine and Industrial Art in Newark, N.J., where he served as director after 1928. In 1937 he represented the United States at the International Art Congress in Paris and wrote numerous articles in his field. His work in design, teaching, and administration in art and art education fields established him as a national leader and he was listed in Who’s Who in America from 1924 to 1945. Though he spent much of his career in the East, he sometimes came back to the campus and on one occasion, in 1907, he encouraged art students at River Falls to come to New York to continue their education in night schools.