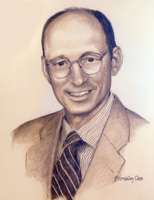 As a neurosurgeon and professor of neurological surgery at the Mayo Clinic in Rochester, Minn., for more than 20 years, Dr. Ebersold's patient list included many well-known world leaders. Among them were former President Ronald Reagan, King Hussein of Jordan, President Zayed of the United Arab Emirates, and the wife of Egyptian President Hosni Mubarak.

Dr. Ebersold attended medical school at UW-Madison and served in La Crosse for two years before joining the Mayo Clinic as a resident in neurological surgery in 1972. In 1976 Dr. Ebersold became a neurosurgeon at the Midelfort Clinic in Eau Claire, Wis., and in 1979 returned to Mayo as an instructor in neurosurgery.

He served on numerous Mayo Clinic committees, including the International Activities Committee, the Administrative Committee of the Board of Governors as well as the Officers and Councilors of Staff. He received many honors, including election by his colleagues to receive the Distinguished Mayo Clinician Award in 1994. Professor Ebersold has had visiting professorships and guest lectureships across the United States, including Minnesota and Wisconsin. He has authored or co-authored many scholarly works and from 1970 to 1980 served as a major in the U.S. Army Reserves.