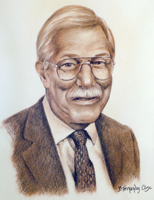 An education professor and literacy researcher who has had a long and productive career in the field of reading education has been named the 1998 Distinguished Alumnus at UW-River Falls.

Receiving the award is Robert Dykstra, a 1957 elementary education and guidance graduate Dykstra earned master and doctorate degrees in educational psychology and education from the University of Minnesota. He is a New Brighton, Minn., resident.

Dykstra's prolific literacy work, spanning three decades from the mid-60s to the early 90s, includes research that continues to be universally recognized as among the most important ever conducted in his field.

In 1967, Dykstra and colleague Guy Bond published the groundbreaking study "The Cooperative Research Program in First Grade Reading Instruction," commonly known as "The First Grade Studies." This national investigation remains the largest and most thorough study ever completed of beginning reading.

The study was so profound that the entire issue of "Reading Research Quarterly" in the summer of 1967 was devoted to publishing the findings. Furthermore, the publication has recently decided to reprint the study in its entirety because of its relevance today.

Among Dykstra's legacy to UW-RF are several faculty members who received their doctorates as his advisees at the University of Minnesota. They include teacher education Professor Brenda Shearer, College of Education and Graduate Studies Dean Kathleen Daly, the late Professor Ronald Johnson, who was instrumental in developing the master of science in education reading program, and Professor Marilyn Naylor, who recently retired from a long and distinguished teaching career in reading and learning disabilities.

Before attending college, Dykstra began his teaching career in a one-room schoolhouse near Plymouth, Minn.. After being drafted and completing a two-year stint in the Army, he taught a fifth and sixth grade combination class in Cedar Grove.

Recent honors for Dykstra include being elected to the international Reading Hall of Fame in 1996 because of his significant contributions to the understanding of the reading process and to the teaching of reading in schools.

Along with assuming various leadership positions at the local, national and international levels and being involved in numerous volunteer activities, Dykstra continues to remember his ties to UW-RF. He has been an active member of the UW-RF Foundation Board of Directors for two years.