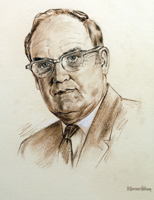 Among the seniors of 1938 was a student from Baldwin, Daniel J. Dykstra, a product of the Dutch immigration to America that valued religious freedom and the work ethic. As a student he had won membership in the Honor Society, served on the debating teams and Student Voice staffs, was one of the organizers of the first Student Senate, president of the junior class, and a member of various intramural teams and other organizations. When he graduated with a major in the social sciences, he taught at Frederic High School until the war came, then became an officer in the Navy, serving in the Mediterranean theatre. When peace came, he studied law at the University of Wisconsin, and in 1948 was awarded the L.L.B. degree and later returned to receive the J.S.D. degree. As a law student he served as editor of the Wisconsin Law Review and received the Order of the Coif.

Dykstra joined the Law School faculty at Drake University in 1948, then moved to the University of Utah where he was professor of law, dean of the Law School, and academic vice president. After moving to the University of California-Davis Law School, he later became dean. In 1959 he was named Fulbright Professor of Law and spent a year teaching at the University of Melbourne, Australia. He has also served on the faculty of the Salzburg Seminar in American Studies in Austria. Dykstra was also visiting professor of law at the universities of Minnesota, Wisconsin, Pennsylvania, Stanford University, and other law schools. His research appeared in various journals of law and his monograph "The Right Most Valued by Civilized Man" was widely circulated. In 1960 Dykstra was commencement speaker at UW-River Falls.