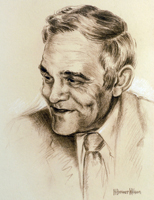 In the summer of 1938, after graduating from Algoma High School, farm boy Richard J. Delorit was plowing when his high school agriculture teacher came to talk with him about going to college. He urged him to study agriculture, rather than music, and to attend UW-River Falls. That day Delorit made the decision to study agriculture and he now says, "It was the right decision. I would have set music back 20 years."

At UW-River Falls, Delorit was president of the FFA Chapter, state president of FFA, and received its American Farmer degree. After his graduation in 1942, he taught at Plymouth and Abbotsford, and in 1953 joined the River Falls High School faculty where he served as supervisor of student teaching for the UW-River Falls Department of Agriculture. Three years later he joined the college faculty and in 1957 became the dean of the Division (later College) of Agriculture. Dean Delorit became academic vice president in 1964 and served as interim-president in 1967-68. From 1968 to 1986 he was vice chancellor.

Delorit was granted the Ph.D. degree by the University of Wisconsin-Madison in 1959, doing his research on woodland pastures. He co-authored Crop Production, a high school text widely used throughout the United States and in translation in Latin America. He also contributed to Horse Science Handbook and is the author of An Illustrated Taxonomy Manual of Weed Seeds, which has been in use in most of the nations of the western world. C. R. Gunn of the Research Division, U.S. Department of Agriculture, said of this book: ". . . A major contribution in the field of weed identification and . . . a major milestone in the extensive use of color photography."

This distinguished alumnus served on the Governor’s Task Force on Local Government Finance and Reorganization, was president of the Wisconsin Association of Vocational Agriculture Instructors, and director of the River Falls Golf Club, the First National Bank of River Falls, and the UW-River Falls Foundation.