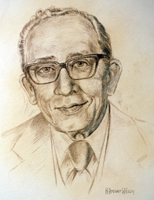 In his student days, John W. Davison, known as ‘Jack’, was a leader–active in debating, extempore, and oratory–president of both Masquers and his freshman class, and a member of other campus organizations. Upon graduation he taught social science and coached debating at Clintonville and River Falls high schools, and then studied law at the St. Paul College of Law. He was a practicing attorney in River Falls from 1950 until his death.

Davison was a charter member of the UW-River Falls Foundation and served as treasurer, vice president, and president over the years. He was chairperson of the Sustaining Associates who undergirded the Foundation in its early days and served on numerous committees since that time.

Attorney Davison was active in community and alumni affairs, including the Lions Club, Masonic Lodge, and the River Falls Alumni Chapter. His greatest contribution to the University was the strong support he had given the Foundation during the years of his presidency (1971-75) and at other times.