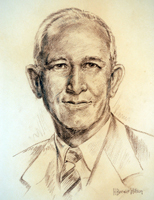 Chalmer Davee grew up in River Falls, was a student in the Campus School, and graduated from the two-year mathematics and science course in 1922. As a student he was president of his class, was a member of the Meletean staff, Lincolnian debating society, and YMCA, and was active in dramatics. Following graduation he taught high school at Three Lakes and Neillsville before earning his medical degree at the University of Minnesota in 1929. His first practice was in Montana, but he soon returned to River Falls where he joined C.A. Dawson in private practice. During World War II Davee served as a Navy commander and saw action in the Pacific.

When Davee left private practice he joined the medical staff at the Veterans Hospital in Biloxi, Miss., and later was administrator of veterans hospitals in Marion, Ill.; Hot Springs, Ark.; Columbia, N.C.; and Phoenix, Ariz.

Davee served on the Board of Regents from 1945 to 1953 and was a leader in broadening the mission of the State Teachers Colleges to include the Liberal Arts, which resulted in changing the title of these institutions to State Colleges in 1951 and to State Universities a few years later. When the new library was opened in 1954 at the UW-River Falls, it was appropriately named in his honor. It was his good fortune to be on the Board of Regents at a time when postwar enrollments were increasing and a multi-purpose institution was emerging, and he contributed to this process in an effective way. He retired to Sun City, Ariz., where he died on June 3, 1983.