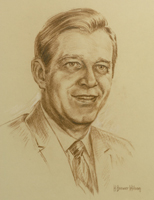 When Louis M. Daniel received the Distinguished Alumnus Award 30 years after he entered UW-River Falls as a freshman from Grantsburg, he reminisced about the day when he first arrived on campus. He was met at the hotel by Professor John M. May and taken to a nearby farm where Daniel was to earn his room and board by doing chores. He remembered that his four years spent at River Falls studying agricultural education was "nothing but pleasurable." Active in student affairs despite working his way through school, he participated in intercollegiate debate and served on the Student Senate.

Following his graduation he became an agent for Equitable Life of Iowa and remained with that company since that time. He won all the major honors and awards given by his company: Member of the President’s Cabinet, President of the Chapter of Life Underwriters, life member of the "Million Dollar Roundtable," and on the roll of the Equitable of Iowa Hall of Fame, the highest individual award given by the company. For many years Daniel was district supervisor, and had offices in both St. Paul, Minn. and in Florida.

Always active in alumni affairs, Daniel was president of the River Falls chapter and served as national alumni chairperson. He was a long-time member of the Foundation Board and active on its committees. His alma mater had reason to believe the last two lines of the advertisement he ran in the Student Voice soon after he graduated from college: ". . . So thank God for the great endurance / Of the man who sells insurance."