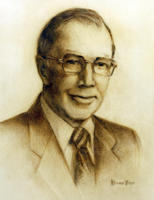 When Chancellor Gary Thibodeau introduced the distinguished alumnus for 1989, he remarked about the exceptional accomplishments of "truly exceptional people."   Distinguished alumni have one feature in common, he said, though they have walked down different paths in their professional careers.  That feature, Thibodeau said, is simply that, "they make a difference-a very positive difference-in the lives of people."  Arnold Cordes has truly made a difference in the lives of thousands of young people in this state.

Cordes taught vocational agriculture at Luck for three years and at Eau Claire for more than 17 years.  In addition, he served in the Army during World War II, became state supervisor of vocational agriculture programs for three years, and ended his professional career serving as state FFA executive secretary and member of the Department of Public Instruction for 16 years.  When he had completed his work in these occupations, Cordes established the FFA Foundation for which he served as executive director until his retirement in 1992.

Cordes has received various awards for his contributions to the FFA organizations.  They include the Governor’s Special Award, the National FFA Award, the Farm Bureau Distinguished Service Award, and the Agriculture Teachers Outstanding Service Award.  Cordes’s contributions have had a positive impact on vocational education.