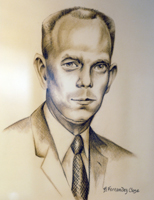 In 1966 Theodore Clymer was the youngest person to have received the distinguished alumni award. A native of Hudson, he pursued a career in the field of reading. He became a research assistant at the University of Minnesota upon graduation in 1949 but returned to his alma mater the next year to serve as a supervising teacher in the Ames Laboratory School. In 1952, when he was granted the Ph.D. degree in educational psychology, he was appointed assistant professor of education at the University of Minnesota, became an associate professor in 1957, and a full professor in 1959.

Clymer was chair of the studies and research committee of the International Research Association in 1961, served as president in 1964-65, and served as editor of the research issue of The Reading Teacher. He was also editor of Reading Research Quarterly and served as consultant on research in English for the Comparative Research Branch of the U.S. Office of Education. Clymer’s work in the field of reading includes writing numerous articles for professional journals and yearbooks and co-authoring developmental reading texts.

Of his early years, this distinguished alumnus once said: "Several factors had a strong influence on my professional and personal life: the good theoretical foundations in education, psychology and science; dedicated teachers who knew their fields but who also took sympathetic interest in their students; the part-time jobs I held. I worked in the library for Miss Gibson and Miss Fuller and for Bloom of the Social Science Department, but primarily for John Gage, the retired army sergeant who ran the college cafeteria and was a strong influence on both Mrs. Clymer and me. His good sense, his fairness, his practical attitudes toward life and his number 10 cans of leftovers for the weekend sustained us emotionally and nutritionally."