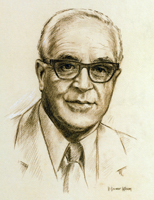 In the early depression years when Norman Christianson entered the State Teachers College at River Falls, he had $1.50 in his pocket, a strong desire to study agriculture, and the will to work for that goal. As the Centennial History says of him, he "asked to have the college fees and room rent deferred until he had more cash, then got a job on a nearby farm part-time and soon was solvent. He cooked his own meals . . . (and) on weekends he would go home to replenish the larder . . ." When he was a senior, he went to the prom escorting a fellow student, Marion Hawkins, who also was to receive the Distinguished Alumnus Award at a later date. He also left with a Gold R.

After teaching agriculture in Prescott High School and serving as a line officer in the U.S. Navy during World War II, he became a beef farmer near Roberts, raising purebred Angus on a 470-acre spread. His leadership role in agriculture is shown by the numerous offices and honors conferred upon him. He was a director and president of the Central Livestock Association of St. Paul, Minn., listed in Who’s Who in Wisconsin Agriculture, holder of the Honorary Farmer Degree, member of the Livestock Committee of the American Farm Bureau, and others. He also was named Mason of the Year, served on the River Falls School Board for many years, and held the office of president in the River Falls Alumni Chapter. From 1965 to 1972, Christianson was an influential member of the Board of Regents of the Wisconsin State Universities, and often served his alma mater in that office.

When he was on the coordinating Council for Higher Education, Chancellor George Field said of him: "Education has always been his dominant outside interest, and he has always shown particular concern for equitable treatment of the small campuses whose financial exigencies he appreciated." In retrospect, it seems fortunate that this farm boy had the courage to tackle four years of college with only $1.50 in his pocket and that the college somehow managed to defer the payment of fees for him.