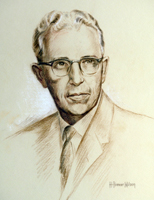 The Student Voice was prophetic in 1927 when it said that,

"No River Falls College ‘Who’s Who’ would be complete without the name of John Burke, more universally known as ‘Jack.’ Jack’s entire career has been a series of successes and victories in many fields . . . He made the first team in debate, and many debates were saved on the strength of Burke’s rebuttal. In the year 1925-26 he represented the school in oratory and debated on the school team. He presided over many school fests and other school assemblies . . . His ready Irish wit and good humor have made him not only a successful speaker, but a popular man on the campus. Burke was elected president of the fourth year class. . ."

Forty years later, Burke returned to the campus to receive the Distinguished Alumnus Award. In those years he had taught high school at Algoma and Belleville, served as a parole and probation officer, and since 1938 had been warden of the Wisconsin State Prison at Waupun. During World War II he took a leave to serve as a major with the Army Correctional Division but returned to his Waupun post until his retirement. During his career he served as president and committee chair of the principal professional associations, headed a survey of the Pennsylvania prison system, and received awards including the Knights of Columbus Wisconsin Layman Award in 1967, the Kewaunee County 4-H Alumnus Award in 1964, and the 4-H Club Award at the University of Wisconsin in 1965.

When he received his Distinguished Alumnus Award at the 1968 River Falls Commencement, he reminded the audience of the close relationship between faculty and students at River Falls, and cited the Code of Ethics of the old River Falls Normal School which had guided him with its first provision "I will be square," closing with living daily "the Golden Rule."