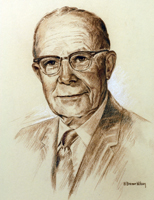 Beneath the picture of Carroll J. Brown in the Meletean the year he completed the three-year course at the River Falls Normal were these words: "Small men from small towns make big men in the world." This was far more prophetic than he or the editor could have known at the time. He was from the River Falls High School and was the first generation to see post-high school education. As a student he was on the yearbook and newspaper staffs, sang in the Glee Club, debated in the Lincolnian Club, and was a member of the YMCA. No doubt this young man looked upon his Normal as the high road to opportunity and the extra-curricular activities were the entrance to it. Later, as a major businessman in the graphic arts, he said that he owed his interest in that field to his years when he was manager of the Student Voice and Meletean.

After graduation, Brown went to work immediately for Buckbee Mears and served as a salesman of high school and college yearbook printing for 11 years. During this time he acquired an interest in Greene Engraving in St. Paul and, 25 years later, he and his sons bought complete control of the firm and changed the name to Brown Inc. Over the years Brown Inc., of which he was president, often lent assistance to the publications of his alma mater.

Brown’s civic activities included being an officer in the St. Paul Advertising Club, Twin Cities Graphic Arts Association, the first Presbyterian Church of Stillwater, Minn., the Cotillion Club, the Stillwater Country Club, and Croixdale. He was a charter member of the UW-River Falls Foundation and served as its president for one term. Indeed, this small town boy did make a niche for himself in the business world, one that was opened up for him by his yearbook work in his student days. Since that time he repaid his alma mater many times for opening this door for him.