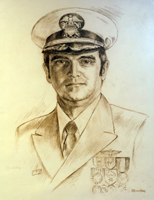 When this graduate of Watertown High School attended UW-River Falls where he specialized in mathematics and physics, he was active in intramurals, was vice president of the junior class, served in the Student Senate, and belonged to other organizations. A career as a naval aviator might have been predicted, but hardly that of an astronaut.

Brandenstein entered active service with the Navy upon graduation, participated in 192 combat missions in Southeast Asia in 1967-70 while attached to the USS Constellation and USS Ranger, became a Naval Test Pilot conducting research on electronic warfare systems, and served as a flight instructor until he entered the training for duty as an astronaut. In his naval career he logged 3,800 hours and flying time in 22 different aircraft and made 400 carrier landings.

Captain Brandenstein played a pivotal role in advancing America’s space program through his activities as an astronaut, space Orbiter pilot, or commander aboard four shuttle missions. He piloted the Challenger on August 30, 1983, and commanded flights of the Discovery on June 17, 1985 and the Columbia on January 9, 1990. His fourth and final mission, on May 7, 1992, as commander of the maiden flight of the Endeavour, captured international attention during a daring rescue attempt of the crippled International Communications Satellite (INTELSAT) through three space walks, including a record three astronauts who exited the Endeavour to physically capture the satellite with their hands.

Brandenstein retired from the National Aeronautics and Space Administration (NASA) and the U.S. Navy in October 1992 after 15 years of service. His last position was chief astronaut for NASA.

On May 23, 1993, Captain Brandenstein was awarded an honorary doctorate at graduation ceremonies at UW-River Falls. He was the second person to be chosen for that distinctive honor.