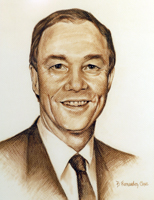 George Beestman, who graduated from UW-River Falls with a bachelor of science degree in agricultural education in 1961, is internationally recognized as a leader in the formulations of agricultural crop protection chemicals.

He is a senior research associate with DuPont Agricultural Products of Wilmington, Del. Previously he was director of research and development for United Industries and senior research specialist and chemist for Monsanto, both in St. Louis.

Beestman is active in numerous technical associations and has held leadership positions in the American Society of Testing and Materials and Sigma Xi. He has been listed in American Men and Women of Science, Who’s Who in the East, and Who’s Who in the Midwest. He has been an author or editor in a distinguished list of publications and has received several citations and awards including a Research Achievement Award from Monsanto and a Distinguished Service Award from International Voluntary Services, with which he served in Liberia from 1961 to 1963.

He received a master of science in 1967 and a doctorate in 1969 from UW-Madison.