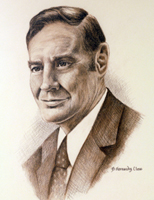 When Duane Anderson came down from Gilmanton and began his college career in 1936, he earned his board and room by working on a dairy farm, often having to rush to an early biology class without changing from his work clothes.

Professor Catherine Lieneman realized his potential and she asked him if he would like to work as a laboratory assistant. With this income he could give up milking cows morning and night. Besides, it opened up doors of the biological world to him. He later said that he had never considered pursuing a career in medicine until Lieneman suggested it to him.

While pursuing his studies he won membership in the Honor Society, joined several student organizations such as the German Club and the YMCA, and in his senior year was admitted to the University of Wisconsin-Madison School of Medicine. With his medical degree, he went on to the then University of Minnesota-Mayo Foundation for specialization in surgery and began his distinguished career as a surgeon in Madison.

Anderson is past chief of surgery at Madison General Hospital, past president of the Madison Surgical Society, past president of the Wisconsin Medical Foundation, past grand master of the Masonic Fraternity of Wisconsin, and has held various offices in the Madison Rotary and the Lutheran church. He has also served as clinical professor of medicine at the UW-Madison School of Medicine.

UW-River Falls may have helped him open doors that led to a distinguished career, but his early life in northern Wisconsin gave him a life-long hobby. Prior to his retirement, he personally planted 500,000 seedlings, and was able to sit in the shade of his own forest when he put away his lancet and scrubbed up for the last time.