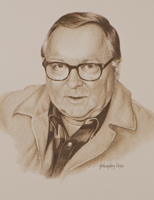 Arlin Albrecht attributes his entrance into the field of journalism, the field that would later shape his prestigious career, to the time he spent as a student at UW-River Falls. Like so many who have attended UWRF, Albrecht was a first generation college student. Originally an agricultural education major, Albrecht chose to attend college only after his high school agriculture teacher insisted that he was up to the challenge.

Albrecht credits his decision to become a journalism and economics dual major to “the country boy seeing the bright lights of the city and realizing perhaps milking dairy cows wasn’t what I wanted to do the rest of my life.”

Through what he describes as “an unusual set of events,” Albrecht was named editor of the Student Voice during his sophomore year. As editor, he worked under the advisement of Dr. Wayne Wolfe, a training he describes as more important than any class he ever took.

While working as editor of the Student Voice, Albrecht came to know and work closely with the staff at the River Falls Journal.

“In that era, this whole business was full of characters,” Albrecht said. “There were line type operators who would intentionally insert typographical errors just to see if this college newspaper editor could catch them.” Albrecht obviously did so successfully as he was hired by the River Falls Journal upon graduating from UWRF in 1958.

After working with the River Falls Journal Arlin Albrecht became a reporter for the St. Paul Pioneer Press and a graduate student at the University of Minnesota with his sights set clearly on obtaining a job in one of the nation’s largest media markets.

To obtain experience as an editor and a chance to work with Phil Duff, “one of the best country newspaper editors in Minnesota at the time,” Albrecht passed up job offers in San Diego and Hollywood to work in Red Wing, Minnesota. Still focused on establishing a career in a major media market, Albrecht  asked for assurance from Duff that after one year, Duff would provide him with a letter that would help him secure the big city opportunity he coveted.

However, Albrecht never ended up leaving Red Wing. In fact, he and his wife Marilyn (a 1956 graduate of UW-River Falls) married in 1962 and went on to raise two daughters, Rebecca & Elizabeth (Beth), in the Red Wing area. Rebecca and her husband, Mark Poss, and their two children, Huck (13) & Lucy (7) still live in Red Wing. Beth and her husband, Peter Sagal, now live in Oakpark, IL with their three daughters – Rose (13), Gracie (10), and Willa (7).

But despite never heading to the “big city,” Albrecht still cultivated an award winning career that is respected and honored by all those who work in journalism, regardless of what size market they work in.

Albrecht also made a bold decision to cover the Vietnam War more personally by becoming a Vietnam War correspondent for the Red Wing Republican Eagle. “It was the last great war for journalism,” Albrecht said. “You could go anywhere you were dumb enough to go.”

With a portable typewriter, three cameras and half a dozen lenses, Albrecht chronicled the lives of soldiers from Red Wing and mailed their stories back for publication in the Republican Eagle. These stories took on special meaning for readers, particularly the friends and families of those serving overseas.

In a few tragic cases, Albrecht was the last person from Red Wing to have interacted with the soldiers prior to their deaths. In those instances, his chronicles took on extra meaning and resulted in strong connections between Albrecht and the soldiers’ families.

Publishing and Community
Albrecht eventually became CEO of Red Wing Publishing, which under the leadership of Albrecht and his wife Marilyn, grew to include 21 daily community newspapers in Minnesota and Wisconsin from Red Wing to International Falls. Today, over 50 years later, the Albrechts still own Red Wing Publishing, although they sold off approximately 10 of the 21 papers in 2001 and their son-in-law, Mark, now serves as COO for the company.

Albrecht recognized early on the futility of trying to micromanage so many newspapers covering a large geographic area, and always encouraged his editors to work independently. He knew the key to success was for each editor to engage the communities they lived and worked in through service. Service would increase connections between the public and the newspaper and improve the product Albrecht was selling by ensuring the editors were knowledgeable about their subject matter.

Albrecht’s philosophy of community was proven effective when several of Red Wing Publishing’s newspapers won “Best in Nation” awards. Albrecht was also personally awarded the Herman Roe Editorial Writing Award by the Minnesota Newspaper Association (MNA) in 1990 and the Al Mcintosh Distinguished Service to Journalism Award by MNA in 1997.

Commitment to SERVICE and the environment
Through the years, Albrecht’s commitment to service has affected the Red Wing community in  profoundly positive ways.

As board chair and director of Fairview Red Wing Health Services, Albrecht successfully merged a hospital and medical clinic that had previously suffered from a confrontational relationship. He also oversaw the acquisition of land that allowed the newly merged medical campus to expand and therefore better meet the needs of the growing Red Wing community.

Through his involvement in community banking, Albrecht worked to make sure that local businessman and women could obtain the capital they needed to pursue their entrepreneurial dreams.

Additional examples of Albrecht’s service to Red Wing include his tenures as president of the Red Wing United Way and Chamber of Commerce, as well as his extended run as director of the Red Wing Area Fund, a philanthropic organization which has invested  more than $11 million in the community since 1980.

Today, Albrecht is continuing his commitment to water quality through the Lake Pepin Legacy Alliance, “an ad hoc citizen group seeking to save the lake from sedimentation and phosphorus pollution.” Keeping the importance of community in mind, Albrecht is seeking a way to clean up Lake Pepin that respects the realities of all those in the Red Wing community, including the agricultural industry.