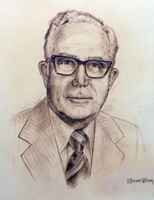 When Martin Abrahamsen graduated from UW-River Falls in 1930, the Meletean listed his extracurricular activities which included the debate team, Student Voice, Homecoming Committee, the Agrifallian Society, basketball and tennis. With a major in agricultural education and science, it was obvious that Abrahamsen would make his mark in the agricultural world.

Abrahamsen began his career as a teacher of vocational agriculture at Twin Bluffs. He earned his master’s and Ph.D. degrees at UW-Madison and taught agricultural economics at North Carolina State University and West Virginia University before joining the staff of the U.S. Department of Agriculture where he served first in the Farm Credit Administration (1949-54), then in the Farmer Cooperative Service.

He is the author of the college text Cooperative Business Enterprise, editor of Readings in Agricultural Cooperation and has written hundreds of articles and reports on topics in agricultural economics. In his latter years he also offered courses in cooperatives at the University of Maryland.

Abrahamsen’s career was spent giving intellectual leadership to agriculture. Born on a Wittenberg farm, armed with degrees in agriculture from River Falls and Madison, broadened by experiences in debating, sports and other student activities, he wrote many books and articles and left the world of cooperatives enriched by his contributions.