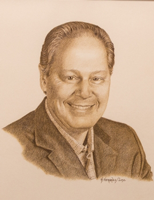 Brad Hewitt serves as chief executive officer of Thrivent Financial, the country's largest fraternal benefit society. A fortune 500 organization, Thrivent is one of the 10 largest mutual companies in the U.S., serves more than 2.3 million members nationwide and manages more than $100 billion in assets.

Hewitt began his career in 1982 with Securian in the Actuarial Services department. He joined UnitedHealth Group (UHG) in 1986 as director of underwriting. From 1993 to 1998, he served as chief financial officer and later as CEO of Diversified Pharmaceutical Services (DPS), a division of UHG. Following the sale of DPS to SmithKline Beecham, he felt called to serve in a role with the Lutheran Church Extension Fund. From 1998 to 2003, he served as chief administrative officer of The Lutheran Church--Missouri Synod in St. Louis, Mo.

A native of Minneapolis, Hewitt graduated from the University of Wisconsin-River Falls in 1982 with a Bachelor of Science degree in mathematics. He completed the Harvard Graduate School of Business Program for Management Development in 1995.

Hewitt has been active within the UWRF community. In 2011, he served as Executive in Residence in the College of Business and Economics. He has also been a key supporter of UWRF's Falcon Scholars program.

Hewitt currently serves on the board of Habitat for Humanity International , the board of the International Cooperative and Mutal Insurance Federation and the board of managers of the Ron Blue Institute. He also volunteers as vice-chair of Itasca, an employer-let cross section group that works to improve the quality of life for all in our region. He is a member of the WHEREhouse Church, a new church plant in urban St. Paul. He is past chair of the Board of Regents at Concordia University St. Paul.  He is co-author of the book, "Your New Money Mindset: Create a Healthy Relationship with Money," published in 2015.

Hewitt and his wife, Sue, live in St. Paul, and have two adult children.