You can always build upon your education. - Richard "Dick" Peterson, 1964, Physics & Math

What is something that surprised you about UW-River Falls?

I learned quickly that I enjoyed and needed the social sciences and humanities for a richer life. Thus, the liberal arts portion of the curriculum at UW-River Falls impacted by life more than I expected. Folks like Professor Richard Darr (Economics), Professor Ed Peterson (History), Professor Vera Moss (Humanities) and Professor Jim Crane (Art History) had special impacts during the four years I attended the university.

What are some experiences you've had that benefit your career?

The most crucial benefactors were my physics professors, Professors Sukow and Albert. The opportunity to do lab work was strong. I made use of some fairly new nuclear instrumentation. Earl Albert seemed to recognize real discipline and "hungry" students who wanted to climb. He also ran a tight organization that had produced some past graduate students in physics and applied physics. Wayne Sukow was in the process of completing graduate work and brought untold inspiration and knowledge of the world of graduate physics. He conveyed a modern vector treatment of physics that was important for my graduate work to follow.

What are some things you do in your position at Bethel University or outside of the university?

I worked with students in developing new methods for fast interferometric and holographic measurements of all sorts. I was appointed the first University Professor at Bethel for my research, teaching and physics community service. From 2010-2012 I served in Washington as a Program Director in the physics education group of the National Science Foundation's Division of Undergraduate Education. 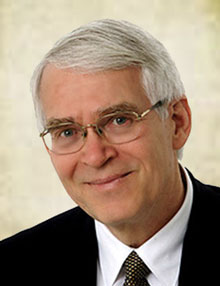