The biggest piece of advice is to be persistent and persevere because sooner or later the door you want to open, will. Don't give up. Persistence pays off. Know that you are well prepared when you leave UW-River Falls. - Cathy Wurzer, 1992, Journalism

Why did you go to UW-River Falls?

I chose UW-River Falls because I wanted to get out of south Minneapolis where I grew up. I thought about other universities, but a gentleman I knew who was along-time investigative reporter told me to check out the journalism program at River Falls. At the time, I aspired to be a newspaper reporter. After visiting the campus and meeting the faculty from the journalism department, I decided it was where I wanted to be. The smaller, homier atmosphere at River Falls appealed much more to me than a larger university such as the University of Minnesota. It worked out great and I was still close to home.

What is something that surprised you about River Falls?

As an alumna, I served on the UW-River Falls Foundation Board of Directors. In that capacity I was surprised to learn that UW-River Falls was not very well known. I think River Falls has a great jewel of a campus and I only wish more people were aware of it.

What were you involved in as a student?

As a freshman, I couldn't work at the Student Voice newspaper so I joined the Block and Bridle club. I loved animals and horses and wanted to have an animal science minor. I was also one of the co-editors of the Prologue, which was a campus poetry anthology. I read the newscasts on the student radio station WRFW and ended up becoming the station manager my senior year.

How did UWRF prepare you for your current job?

Al Murray was a great teacher of radio. He prepared me to stand apart from others entering the field. The education I received from UW-River Falls prepared me to successfully land my first job and get to where I am today. From having the opportunity to immerse myself into broadcast with the student radio station, to the one-on-one relationships I developed with my professors who mentored me and gave me the confidence I needed, it has all served me very well throughout my career. 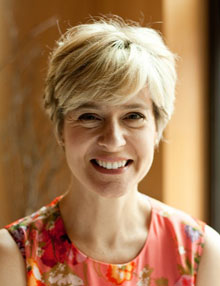 Junior and senior year at KSTP

Working to publish my second book