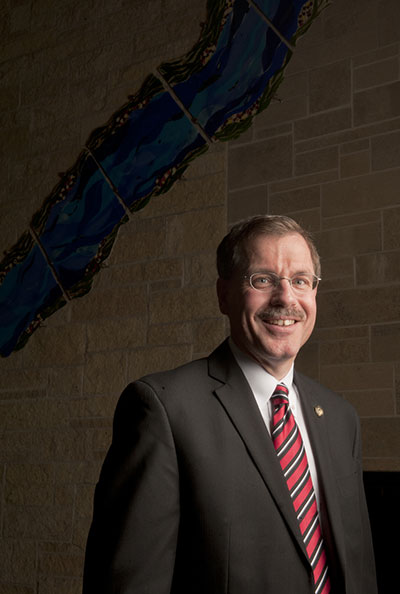 Dean Van Galen is the 18th Chancellor of the University of Wisconsin-River Falls, and has been serving in that role since 2009.

Van Galen's tenure as Chancellor has been highlighted with a series of firsts for UW-River Falls. During his inauguration, Van Galen announced UW-River Falls would open a learning center in Hudson with the mission of meeting the undergraduate and graduate educational needs of adults. The Hudson Center opened in fall 2010 and now has an annual enrollment of more than 200 students. To date, 195 degrees have been awarded to students in our MBA and Adult Degree Completion programs.

Another first for UW-River Falls occurred in April 2012, when the university's first comprehensive fundraising campaign, Rising to Distinction, was announced. The five-year goal of the campaign was set at an ambitious $20 million, with an emphasis placed on raising dollars for student scholarships and the Falcon Center health and human performance facility. As of January 2016, six months ahead of schedule, the $20 million goal has already been surpassed.

Under his leadership, UWRF has also ushered in new education abroad programs in China and Mexico, and new academic programs, including bachelor's degrees in agricultural engineering, data science and predictive analytics, and neuroscience. Emphasizing the importance of undergraduate experiences outside of the classroom, Chancellor Van Galen inaugurated the office of Undergraduate Research, Scholarly and Creative Activity in 2015, as well as a UWRF Center for Innovation and Business Development. This latter unit plays an integral role in management of the new St. Croix Valley Business Incubator, which opened in River Falls in 2017.

A Wisconsin native and a 1982 alumnus of the University of Wisconsin-Whitewater, Van Galen, like many UW-River Falls students, was a first-generation college student. Van Galen earned a Ph.D. in analytical chemistry at Kansas State University and conducted post-doctoral research at the University of California at Berkeley. Van Galen began his academic career in 1987 as a chemistry professor at Truman State University in Missouri. As a faculty member, he developed an environmental science study abroad course in Norway and was named the university's 1988-1989 Educator of the Year and the State of Missouri's CASE Professor of the Year for 1991. He later served as vice president for university advancement at Truman and was an American Council on Education Fellow in 1994-1995. Prior to his selection as chancellor, Van Galen served as vice president for university advancement at the University of West Florida (Pensacola) for six years.

Van Galen and his wife, Mary, have one adult daughter, Ashley.