The university has long recognized academic achievement through the granting of awards, scholarships, and honors.  In 1977, the Chancellor and the Student Affairs staff began considering a way of also honoring students who had made significant non-academic contributions to the university. In 1980, the Chancellor's Award for Students was first awarded to five recipients in recognition of their service to UW-River Falls. Since then, 5-12 students have been selected every year to receive this honor. 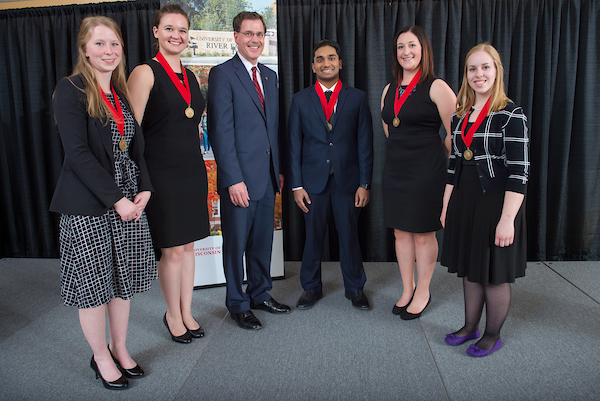 Alanna Bram is a junior who is double-majoring in Biology and Spanish with a minor in Chemistry. Alanna has served her peers through her work as a peer-led team learning leader; as a teacher’s assistant in the biology department; and as an orientation and transition leader. Alanna is a member of Phi Kappa Phi and the Pre-Health Society, as well as Campus Intervarsity. In many activities that she has been involved in, Alanna is a recognized leader, whether as flute section leader for the UWRF Symphony Band, or earning honorable mention at the Howard Hughes Medical Institute Sea Phages symposium, where she presented her undergraduate research findings in 2016.

In 2017, Alanna initiated UWRF’s Shoe Away Hunger Drive. Its purpose is to collect shoes in any condition, which are then sold to raise money to buy food for needy families in the Twin Cities. In its first year, the shoe drive collected nearly 900 pairs, with Alanna singlehandedly advertising for, and then transporting, donated shoes from sites around campus. Her goal this year was 1,000 pairs of shoes. 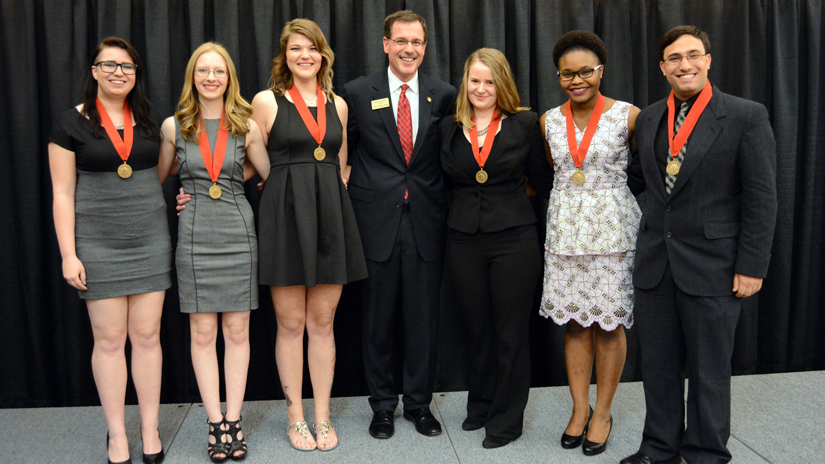 Battah is a senior majoring in biology. From RHA president, to ambassador for the Disability Advisory Committee on the Student Senate, from president for the Pre-Health Society to president of the Muslim Student Association, Battah's influence has made a difference campus-wide. Battah has a true servant's heart, and many of his friends and professors tell stories of his passion for students with disabilities who encounter physical barriers on campus. So much so, that he was asked to become an informal student ambassador for the university's Disability Advisory Committee his first year on campus. 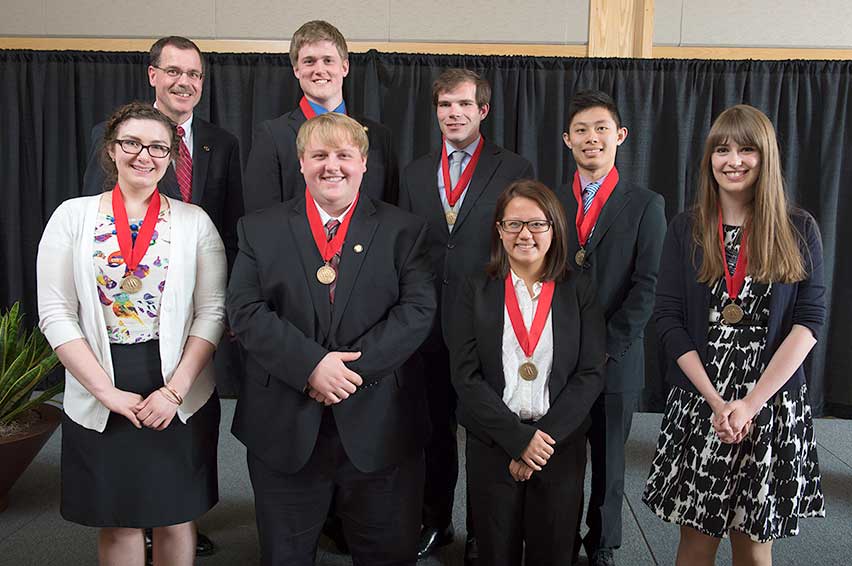 A double major in biology and psychology, Hage created the Dan's Bandana Project to raise awareness of depression and mental illness in response to the suicide of UW-Eau Claire student Daniel Gerbec in 2012. Hage worked with Gerbec's mother, UWRF biology Professor Betsy Gerbec, to develop the idea and to write a grant that led to its funding. She has been a research assistant in both the biology and psychology departments, served as president of Psi Chi Honor Society, and been the peer adviser to the Student Undergraduate Scholarly Activity and Creative Research Council.

This Hastings, Minnesota native singlehandedly raised the level of awareness about climate change and its effects on the nation during his time at UW-River Falls. Saunders, a senior biology major, organized clubs, compiled data, coordinated trips to other states and regularly penning editorials in the Student Voice (student newspaper) in support of sustainability efforts on campus and beyond. In 2013, Saunders founded the Environmental Corps of Sustainability student organization. Since then, he's organized climate petitions, rallies and trips to Washington, D.C. and New York City to protest for environmental causes. He has also led efforts to compile data on UWRF's greenhouse gas emissions and reported them to the national Sustainability Tracking Assessment and Rating System.